15 August 1947 is the day when India got independence from almost 200 years of British rule. It was a very difficult time for every Indian. To make India an independent nation, many non-violent struggles and freedom movements were carried out by our freedom fighters in which they sacrificed their lives for our beloved motherland.

History and Background of Independence Day

We are the masters of the fight for freedom from British rule on this day in 1947 and India has become an independent and sovereign country. Our first Prime Minister, Pandit Jawaharlal Nehru unfurled his national flag at the Red Fort for the first time at midnight on this day. This day marked the end of 200 years old British rule in India and India became an independent and sovereign nation.

Independence Day is celebrated with great joy and gaiety all over the country. On the occasion of Independence Day people hold meetings, hoist our national flag tricolor and sing the national anthem. This day is celebrated with great pomp in our national capital New Delhi. A large number of politicians and common people gather in the parade ground in front of Red Ford. The Prime Minister of India comes and hoists the flag at the Red Fort. After unfurling the flag, he delivers a speech remembering the contribution of our freedom fighters and focuses on the achievements of the government during the last year. They also mention issues that still need to be addressed and then call on future growth prospects and roadmaps. On this occasion foreign dignitaries are also invited to witness this great occasion. Tributes are paid to the freedom fighters who sacrificed their lives during the freedom struggle. “Jana Gana Mana” – Indian National Anthem is sung. The speech is followed by a parade by the Indian Army and paramilitary forces. In all the states, programs are held on similar lines in the state capitals and the chief ministers of the respective states unfurl the national flag. 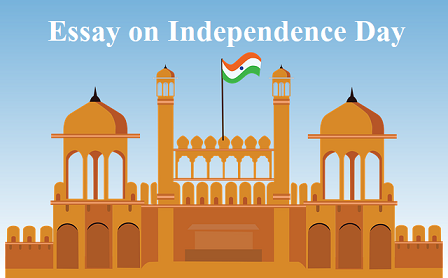 Every year on 15th August, Independence Day is celebrated with great respect in all government and private institutions, schools and colleges. Organizations also organize programs on this day and hoist the national flag and sing the national anthem. Students participating in the parade organized by the school and college. Some historic buildings and schools are specially decorated with lights and other decoration materials reflecting the independence theme. Some special programs like tree plantation and awareness campaigns are organized on this day. On this occasion, the feeling of patriotism and nationalism is infused among the people. Sports, songs and plays and other cultural events and competitions are organized and prizes are awarded to the winners. Sweets are distributed to all the participants and visitors. On this day patriotic songs can be heard on every street corner.

Kite flying is also organized every year on 15th August. This is one of the famous and interesting feature of the Independence Day celebrations held with great enthusiasm all over the country. The sky looks very colorful on this day as it is full of kites of different colours, shapes and sizes.

Programmes on Television Channels and Radio on Independence Day

In the morning all the news channels telecast live activities like flag hoisting and parade organized at Red Fort, New Delhi. Films and documentaries based on the theme of Independence Day are televised on this occasion. Through these programs people and children come to know about various incidents of our freedom struggle. It inspires people and children and fills love for our motherland.

Independence Day is a very important day for every Indian. This day reminds us of our great freedom fighters who fought and sacrificed their lives to free our motherland from British rule. This day inspires and reminds us that our ancestors did their part and now it is our duty to shape and build the future of our country.

Also, we celebrate Independence Day to remember our freedom fighters. Because they were the ones who fought for our country and sacrificed their lives. Our Independence Day is very important for us. Because this is the only day when we can remember our martyrs who died for the country. Also, it is the only day when we forget all our cultural differences and unite as a true Indian.

Independence Day celebrations are celebrated on a large scale in our country. Every government building is decorated with lights. Also, these lights are of three colors Orange, Green and White. Because these are the colors of our national flag. Apart from this, every person whether government or private officer has to be present in the offices. To hoist the national flag of our country and sing our national anthem. However, there are other reasons why our Independence Day is important to us.

To pay tribute to our freedom fighters

In addition, students have solo and duet performances of patriotic songs. To fill us with the feeling of patriotism and love for our country. No work is done in the offices on this day. Besides this, the officers wear tricolor clothes to express their patriotism for the country. Also in various offices, employees give speeches to make people aware about the freedom struggle. And the efforts made by the freedom fighters to make this country an independent nation.

To Kindle Patriotism in the Youth to Serve the Nation

The youth of our country have the potential to change the country. As it is rightly said that the future depends on the young generation. So it is our duty to serve the nation and make every effort to make our country better. One of the main purposes of celebrating Independence Day is to make our youth aware.

At the same time, they have to tell how our country got freedom from the clutches of the British. And the sacrifices made by our freedom fighters for the country. Apart from this, this is also done so that children can get to know about the history of their country. And the way it has developed over the years. So that they should be serious about their future career and try to make our country better.

India’s independence as a nation has come after a lot of blood and sweat. Many people had to sacrifice their lives to achieve this. We honor these people on 15th August every year. We have achieved this day through hard struggle.
Every school celebrates this occasion. Children go to their school in the morning. A ceremony is held there. On this day we remember the sacrifice of our freedom fighters. Sweets were distributed after the function.
It is celebrated in the capital of every state of our country. On this day we hoist the national flag. After that, we sing our national anthem. We feel very proud as Indians.
Involve your child in a variety of ideas and inspire them to improve their English with our class 3 essay and take advantage of simple essays that are suitable for them.

Our country was under British rule for some time. We fought for the freedom of our country. We got independence on 15th August 1947. That’s why 15th August is our Independence Day. This day reminds us of many sacrifices.
The Prime Minister hoists the national flag on this occasion every year. Many patriotic songs are heard on this day. Patriotic programs are shown on television. People enjoy this day by staying at home.
Every street and building is decorated with the national flag. The national function is held at the Red Fort. People of all ages gather near the Red Fort in the morning. After the ceremony, the Prime Minister addressed the audience.
Independence Day reminds us of how our independence was earned. We should follow the path of our freedom fighters. It inspires us to move forward. It inspires us to make our country proud.

10 Lines on Independence Day in English

Question: What is the significance of Independence Day in India?
Answer: Independence Day is very important in India. On this day we celebrate our glorious past with great joy and pride. India is a country of diversities. There are many different religions, castes, languages, cultures in our country.
Question: How is Independence Day celebrated in India?
Answer: We all together celebrate our independence on 15th August every year. Prime Minister gives speech to remind us of our freedom fighters. This day is a national holiday for everyone in India. Students go to school in the morning to hoist the national flag.
Question: How should we celebrate Independence Day?
Answer: As Indians, we all should hoist the national flag. Many blood donation camps are organized on this day. Adults must participate in these camps. Overall we should never forget the efforts of our freedom fighters.

Q1. When is our country’s Independence Day celebrated?

A1. Independence Day is celebrated every year on 15th August. The date of independence is 15th August because Lord Mountbatten – Viceroy considered this date lucky.

Question 2. How is Independence Day celebrated?

A. Independence Day is always celebrated with great enthusiasm in our country. The whole country is adorned in the light of the tricolor. In addition, it is an official holiday throughout the country. To remember the sacrifice of our martyrs. Also, his struggle for the country to get us freedom.

Hope you liked this Independence Day Essay in English. You can share your feedback in comment box..

This website does not hold the ownership rights of any pdf available. This saree pdf is already available on the internet, whose only link we are sharing, which is only available for education purpose. It cannot be used for any kind of commercial.

If anyone has any objection to this link then email us, we will immediately delete this link.